Yoani Sanchez, Generation Y, 6 March 2016 — There is an aunt with her hair in rollers and a maternal gaze, a neighbor in a housecoat and that friend blowing out the birthday candles. They are known faces, family members, but they live hundreds of miles from the island, and come to us, as in a mirror that returns our image without distortions or cracks, through Geandy Pavón (b. Las Tunas, Cuba, 1974) and his exposition, The Cuban-Americans.

In that far off geography, the emigrants weave their dreams, taking on new customs, maintaining their taste for rice with beans, and sighing for a country that only exists in their memories. In that “internal space” where Cuban-Americans pass their lives, what the writer Gustavo Pérez Firmante called the hyphen or dash, “that unites, while separating, nominally and culturally, the Cuban and the American.”

Pavón captures in a series of black and white photographs that were exhibited at the Cervantes Institute of New York, a part of the nostalgia of those who carry their roots on their shoulders so that a new generation can bear fruits. Parents who left behind their world of references, the house where they were born and even their wedding rings, with the obsession of giving their children a future. They are like us, but they have lived more, and the title of “Cubans” sounds sweetly and painfully in their ears.

Their names are Josefa, Paco, Pedro, Yosvany, Miguel… and they have experienced daily contact with other cultures, the pleasure in the little things they managed to carry with them: a yellowed photograph of Grandma and a memory of the dog barking from the farm path. They are also burdened with the depression of exile, the conviction that they don’t belong entirely to the land they left behind nor to the one that received them. They are beings who carry with them their own homeland. 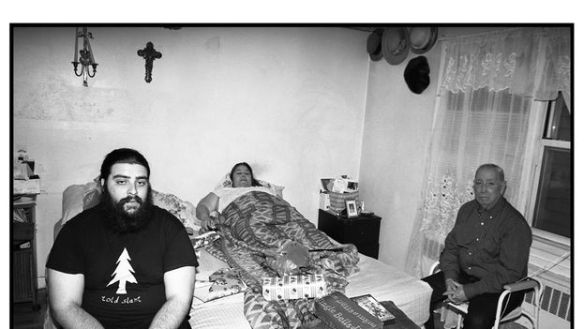 The exhibition is full of intimate moments, indoors, in the heat of the home where the Cuban identity is expressed in a gesture, an attitude or simply the nostalgic feel in a gaze.

The author of The Cuban-Americans took as a reference Robert Frank’s famous series of photographs, The Americans. The work of the American artist was heavily criticized in its time for not embodying “the image of progress and greatness they wanted to project in the fifties,” recalls Pavón. Like Frank, he also wanted to escape “the stereotypes, the commonplace.”

This “no man’s land,” where the exiles have found themselves because of politics, intolerance and immigration restrictions, resembles in many details the island we have woven within the bubble of our intimacy. An identity hard to catch in the tourist snapshots or sepia postcards that so content the foreign eye. More than a photographic work, Pavón has had to undertake a true immersion in that abyss of Cuban identity.

From this plunge, he has returned without beautiful ruins, old cars, or easy smiles. Instead of that, the artist claims to have “found another Cuba outside Cuba,” a nation that long ago ceased to be contained on an island.

20 thoughts on “In The Mirror”